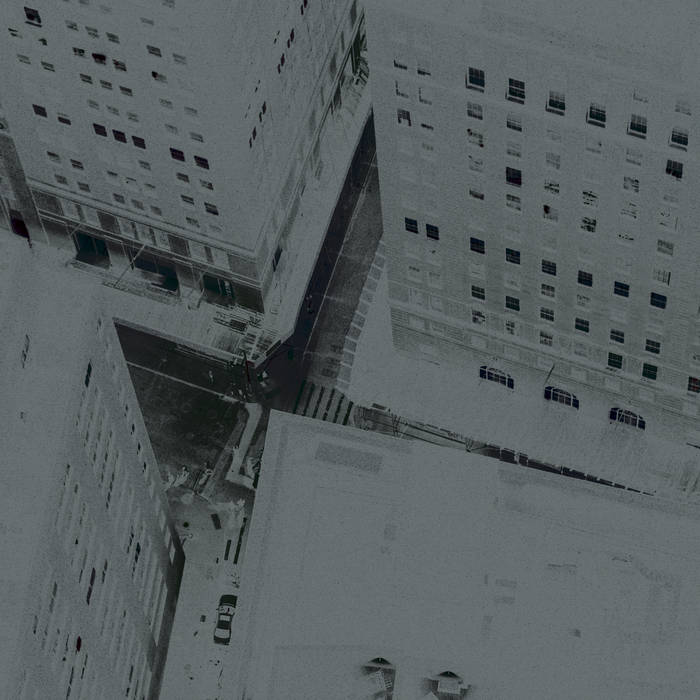 Billy Gomberg is a Brooklyn-based multi-instrumentalist whose past work has been published on labels such as and/OAR, Digitalis and Sunshine Ltd. In addition to his solo output, he operates in a variety of collaborative settings (including Fraufraulein, a duo with fellow label alum Anne Guthrie) and, over the course of the last five years, has carved out a niche for himself at the crossroads of electro-acoustic improvisation, ambient, and minimalist music. Slight at that Contact is a beguiling album that brings to mind both the bucolic electronica of Microstoria and the expansive arrangements of Mirages-era Tim Hecker. “Medial” opens the record with a sea of vaporous, blooming tones set against an array of delicately percussive clicks and cuts. “Acute” further develops this motif, conjuring a cinematic atmosphere that recalls perhaps a train station in some ruined, futuristic metropolis. Over the course of eight understated but nuanced compositions, Gomberg cultivates an intoxicating aural topography, a deep, expressive collection that offers considerable rewards to the attentive listener.

“Medial,” the first track of Slight at the Contact, simultaneously evokes the music from two past decades. Its unhurried electronic abrasions recall Oval c. diskont 94; its shifting array of clicks, pops and squelches bring to mind Oren Ambarchi’s early records for Touch. But when a record opens with a word that indicates the middle of something, shifts of perspective are in store. For while it is possible to take the record as ambient music with an undercurrent of unease, you’ll get more out of it if you push past its surfaces.

It gives you plenty of opportunities to do so. High frequencies reminiscent of birdsong and distant rattles that might come from a microphone drawn across a surface wink at you from the periphery of the distressed bass surface of “Openness,” and trundling machine sounds and distant, echoing conversations break away from the layers of buffed grind that comprise “Lifelike.” These invitations are subtle and quiet, but they occur often enough that they must be part of the plan.

But just what does Gomberg have in mind? The lures to look elsewhere give the music’s sensual qualities an extra dimension, like lumps of paint built up and out from a canvas. But the activity situated at the periphery raises doubts about where the real action lies. Maybe the surface is a curtain, something to be parted?

Flip the record over and the implied birdsong becomes real. The chirps early in “Caprice” draw your ears away from the music’s simmering exterior, and when they reappear later on they seem to point to an eruption of arhythmic pixilation. Is this record a dialogue between natural and unnatural, or near and far? One thing is sure; it allots more payoffs to the act of picking it apart than to the experience of drifting upon its surfaces.

There’s a fascinating mix of distance and closeness in Billy Gomberg’s music. His pieces involve multiple layers between original sound and final effect, which gives them an underwater aura, more like extended ripples than direct hits. Yet each one of the eight beguiling tunes on Slight At That Contact has parts that are clear and present enough that you could practically reach out and touch them. It’s cliche to talk about music as a weaving of textures, but it’s also hard not to think of Gomberg’s work that way. He structures tracks by shifting degrees of blur and clarity like notes arranged on a musical staff.

There’s also something physically present about the arcs in the music on Slight At That Contact. You can practically feel them progressing, unfolding, coalescing. The movement is thoroughly patient and considered, yet it connects on a gut level. It’s music that stirs more than it impresses, rings a tuning fork in your core rather than a neural path in your brain. Of course, Slight At That Contact works on an intellectual plane too, and I’d be happy to think about it for days on end. But mostly I like the way it moves me.

In 2014 I interviewed Students of Decay head Alex Cobb about his own music and various musings on the state of experimental noise and drone. At one point we spoke of “the enchantment of the everyday,” and as Cobb elaborated, “Applied to music, it’s this idea that there are very interesting sounds (that of course have different subjective “meanings” to every auditor) that exist in the world and are viable, even ideal, for use in compositions.” On the latest Students of Decay release, Billy Gomberg applies that phrase to a bleak urban hellscape. The sounds of the machines—running at all hours of the day—become more prevalent the later into the night, when everyone else has drifted off. These are the sounds we grow used to in the background; of the electronics that hum, the subways and sewers that shuffle beneath our feet. When we’re in an environment devoid of those sounds, we grow uneasy as we confront the cold silence of our surroundings.

Slight at that Contact is the sound of literal urban decay, where every crack and hiss overpowers the occasional soothing tone and naturalistic element. “Caprice” stands out for the disparate sounds of field recordings that give way to a choppy, amorphous drone. “Openness” is the closest the album gets to a soothing feel, if only because the cold electroacoustic tones numb the senses with a wall of hushed distortion. Perhaps the dark post-election political landscape influenced my listening, but Slight at that Contact sounds angry, disaffected, yet ultimately defiant. One could listen to escape the darkness that surrounds us, but Slight at that Contact invites in the harsh tones we relegate to the background, providing a soothing balm to our modern malaise.


OMGVinyl:
One great thing about Gomberg’s work, is his use of the room. Every surface in said room, whether small and wooden, or large and cavernous, they all seem to be alive, pulsing and critical to the sound’s over all success—and Slight At That Contact is certainly that. Two sides of churning synths and crackling, skittering computer work provide excellent room enhancement for any metaphysicist, burgeoning or established.


Norman Records:
Billy Gomberg is surely ambient music’s best Billy. Here he has created a fascinating soundtrack of buzzes and hisses that is sometimes cold and dislocated and sometimes warm and hopeful. This twisting shards of sound seem to grow out reaching tendril like towards the ear.  ‘Acute’ is cut and splintered as if glued together with gloy but when he lets the buzzes form into a whole as on the silken ‘Mammals on Stilts’ or the truly delicious ‘Caprice’ he dives headlong into the murky grainy world of the Caretaker. This is the most dislocated track here but also the best. The kind of thing that would be happy soundtracking rain pouring down a rustic window on the greyest day of the year. Stellar ambient stuff to be sad to.

Students of Decay alumnus and strange-dream-inducing electronic composer Billy Gomberg returned to the SoD fold last month, bringing with him another collection of near-ambient, glitch-sprinkled electro-acoustic sound works. Slight at that Contact offers eight lush fog banks that drift in a space located somewhere between the artificial densities conjured by Tim Hecker and the spike-textured soundscapes of the Mille Plateaux universe. Tracks such as opening salvo “Medial” and the electrostatic discharge of “Acute” hint at the latter, while “Caprice,” “All Right,” and “Spectator” smack of the former. Sprinkled among the slowly-moving almost-melodies, the vaporous jets of overdriven tone, and the percussive droplets of icy glitch are what sound like field recordings: muffled voices, shuffling static, calling birds, a nearly empty room. Collectively, these aspects form images, pictures that Gomberg has carefully honed into lovely assemblages that broadcast his unique practice. Slight at that Contact is a somber yet stimulating album. Through deep, attentive listening, one can ultimately see that the artist has bared his true self.

This is music in a larval state. Through a process of unfurling and awakening, Slight At That Contact exercises all of the phonetic and gestural behaviours that will later be refined into language. Segmented body parts unsheathe to the crack of acoustic plosive, as keyboards gurgle and click like a vocal mechanism hydrated and stretched for the first time. Movements are tentative, pressing against joint stiffness and the uncertainty of nascent life, emerging as hums that falter like drowsy probe signals; the first broadcasts of new-born amplifiers and organs, lubricating dry circuitry with fresh electricity, uncurling from cocoons to let the universe in. Field recordings (conversation, the rustles and clatters of warehouse work, echoes of birdsong) smear the edges of the frame, warped through ears that aren’t yet trained to hear them.

What will the album grow to become? I think I can hear the early stirs of blues: distorted harmonies agitate the overdriven signal, while vibrato sends keyboards into melancholic tremble. For every sound that possesses the kernel of familiar music, there’s another that delights me in its failure and emptiness: a gasp of microphone interference, an incontinent leakage of shrill amplifier feedback, a glitch that stammers over a solitary keyboard note. I love the embryonic intentions of Slight At That Contact, but also its miscarriages of transmission – the occasions when tones are choked into silence midway through announcing themselves, or when the warmth of recognisable notes is shunted aside for belches of ungated static. The album is finding its feet, condensing open drones into communicative shapes, refining gurgles of distortion into phonemes, sharpening the slurs of sibilance into pointed patterns of musical meaning. Evidently, organic growth makes for a messy trial-and-error process.

Brooklyn’s Billy Gomberg is an electronic musician who dials back to the clicks and cuts milieu that explored the poetics of a single systematic glitch that could end the world. The celebrated failure of Y2K to bring down civilization left at worst a shadow of paranoia and at best an ambivalence toward the technologies that infiltrate our collective mind, body and spirit. Many artists, Coil in particular, embraced these concepts in a teleological perversion. Gomberg finds himself in a similar cathedral of re-engineered sound, though he’s more of an agnostic in worshiping the glitch. Slight At That Contact is a circumspect album that mopes and shuffles through digital slices and fractures of what may have started out as some spartan tribute to Chet Baker. The surfaces of pixilated polygons, lossy frequency artifacts and deliberately awkward juxtaposition allow for distorted glimpses into what may have once been. Gomberg’s somber synthesis of the tonal quality of bass, clarinet, drum and even bird song have all been fabricated through the realm of the digital, but the existential ennui of these maudlin, overcast sounds carries through regardless.

Bandcamp Daily  your guide to the world of Bandcamp

Cannibal Corpse's George "Corpsegrinder" Fisher stops by for an interview